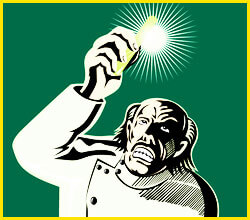 An American and a British chemist meet at a conference. “
So what do you do?” asks the British chemist.
“I work with arsoles,” replied the American.
“Oh I feel you,” nods solemnly the British one, “my colleagues piss me off too.” After a fight, proton sighs to his electron spouse: “I really don’t know why you always have to be so negative.” A chemist came in a bar and ordered H2O. His chemist friend said he'd like H2O too. It was pretty messy. Then he died.

(For the non-chemist - H2O2 - hydrogen peroxide - is in its pure form not good for human health - not at all.) Rule number one of chemistry: Never trust atoms. The little beasts make up everything! Helium walks into a bar fight. Argon hits him with a bar stool. Helium doesn’t react. It is a little known fact that you can lower your body temperature down to -273 °C and be perfectly 0K. Rule number two of chemistry: Although chemistry is a lot like cooking, You. Never. Lick. The. Spoon. The cool guys drop the base. The adventurous guys drop acid into water. Next Part
Best Chemistry Jokes