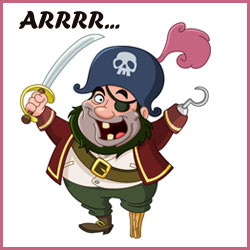 Just think of how many of them have been cannonized!
Oh no, sir, I said pirate ship. What on Earth would possess me to call you a pile of shit?!
Q: How did Captain Hook died?

A: Multiple stabbings. He got a bad case of an itchy rash.
Most veteran pirates can only think about sailing the seas again.

They’ve got ship for brains.
How can you tell a pirate has fallen for modern technology?

It’s the iPatch that gives it away.
Q: What should you do when you see a coughing pirate?

A: Run, he probably has the SAAARRRRRRS! Q: Why is it impossible to take a picture of a pirate with an iron hook?

A: Seriously?  Have you ever tried taking a picture with an iron hook?!
What is the most favorite pirating song, surprisingly?

Don’t cry for me, Arrrrrrgentina...
How did the pirate become a boxing champion so fast?

Nobody was ready to take on his right hook.
Q: What would a pirate wear for his Halloween costume?

A: A pumpkin patch.
Q: Q: How much did the pirate pay for his piercings?

A: A buck-an-ear.
Next Part
of Pirate Jokes